﻿ Islam in Taiwan 2001 Islam in China Light of Islam

The troops that Koxinga led to Taiwan in the mid-17th century included a number of Muslims. Some of them made Taiwan their permanent home, leaving historical traces which are still visible in Lukang 鹿港 and Tamsui, among other places. By the time of Taiwan's retrocession to China in 1945, however, most of the descendants of these early Muslim soldiers no longer embraced Islam; at best, only a few Islamic burial traditions were still observed.

Differences in everyday habits and customs--such as food and drink or religious ceremonies and activities--led to diminished contact between Muslims and Han Chinese in Taiwan during the 1950s. Believers in Islam depended to a large extent on a liaison network that regularly met in a house on Lishui Street 麗水街 in Taipei. By the 1960s, realizing that return to the mainland would not be likely in the immediate future, Muslims in Taiwan began to engage in permanent occupations. Although there was still a considerable degree of interdependence in the ummah (Islamic community), Muslims began, primarily out of professional need, to have increasingly frequent contact with Han Chinese.

Limited by a non-Muslim environment, Muslims in Taiwan today struggle to observe orthodox Islamic practices. Only a few Muslim women have adopted the traditional veil; and a handful of halal butchers and restaurants prepare meat according to the strict Islamic food observances. The busy urban lifestyle in the cities poses many constraints. For example, it is very difficult to attend Juma congregation, which falls on Fridays. In addition, all prayers are conducted in Arabic, which means that every adherent must learn the language despite cultural and linguistic constraints. 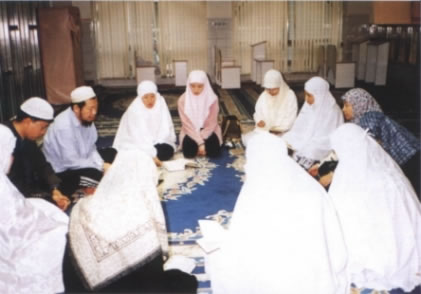 Muslim women in Taiwan are as active as their male counterparts with regard to acquiring both religious and secular knowledge, as the pursuit of knowledge is an obligation of every Muslim. (Courtesy of Hawa Chien)

Despite the Chinese Muslim Association's efforts to send Muslim students overseas to receive formal Islamic education, and despite the ummah's retention of weekend classes, much work still needs to be done for the scattered Muslim population to preserve their faith and identity in a non-Muslim environment. Thus, the Association has developed a plan for "educating secular educators," and the Taipei City Bureau of Education has approved the Association's proposal to hold Islamic courses for primary and secondary school teachers during summer vacations. Providing authentic Islamic information to public school teachers is intended to eliminate stereotyping and misunderstanding.

A small population and limited funds have prevented Muslims in Taiwan from establishing a madrasah (Islamic school). However, Dr. Abdullah Ibn Saleh Al-Obaid, secretary-general of the Muslim World League (MWL), gave his full support to the establishment of a madrasa, during his Taiwan visit from May 30 to June 3, 2000.

Like all members of the international Muslim ummah, the Muslims on Taiwan must observe their five basic duties, including the pilgrimage to Mecca. On February 21, 2000, a total of 22 Muslims from Taiwan began their religious journey, and another 32 departed on March 10 at the invitation of King Fahd Ibn Abdul Aziz. This unprecedented invitation to Taiwan also included 13 other countries: Burma, Cambodia, China, Indonesia, Japan, Korea, Laos, Malaysia, Philippines, Singapore, Thailand, Ukraine, and Vietnam.

Three Arabian-style mosques, constructed in Kaohsiung, Taichung, and Lungkang 龍崗, have joined Taipei's two mosques in meeting the needs of Muslim faithful. These three mosques cost a total of US$2.7 million, half of which was funded by overseas donations, predominantly from the Middle East. In addition, a four-story apartment building financed by Muslims in the Tainan and Kaohsiung areas has been built on a piece of donated land in Tainan to serve as a mosque.

The Taipei Grand Mosque, on the verge of being demolished several times because of disputes over land deeds, was recognized as a Taipei City religious heritage site in 1999 after being surveyed by academics and scholars. The mosque will be protected on its present site.

As of 1999, Taiwan was home to a Muslim population of approximately 53,000, including 34 mullahs, six mosques, five libraries, and one publishing house with ten publications. Many Indonesian workers also reside in Taiwan, around 52,000 by June 2000, and participate in the activities of the local ummah.