﻿ Islamic Education in China Islam in China Light of Islam 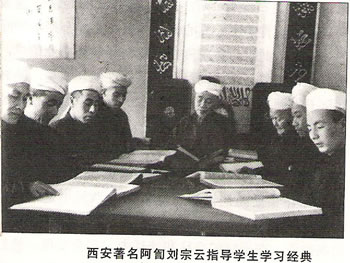 Islamic Education is the religious education of Chinese Muslims. Its main contents include religious belief, value out1ook, ethics and moral principles, and Islamic culture and knowledge. Education is an important way to raise Muslims’ concepts and personalities to a higher level. According to the historical records, a special form of education originated in the middle of the 16th century. Over a long period of development, there appeared two forms of teaching: one form is called Mosque Education, initiated by the pioneer Mr.Hu Dengzhou(1522-1579);the other fom1is called Islamic School Education, which appeared in modem times. The former has a long history, and is a kind of specific religious education, which is taught by imams in mosques-By this means, Islamic knowledge is spread and religious personnel are trained. In order to improve their living standards and the fine traditions of Islam, the pioneer Chinese Muslims always put study and education in the first position. They used the Arabic, Persian and Chinese languages to teach, translate and expound the Islamic scriptures. By doing so, they created the conditions for Islam and Islamic culture to spread in China. Where there is a Muslim community, there is a mosque, so it is very convenient for a Muslim to get Mosque Education. Chinese Mosque Education is the result of Islamic culture adapting to the Chinese traditional cultural environment, and the combination of the traditional education in Arabic countries of the Middle Ages and old-style Chinese private school education. This teaching system suits Chinese social conditions and the Chinese Muslim situation in China. In addition, Mosque Education is open to all Muslim students. A Mosque provides free accommodation and tuition for any student who comes to study. Imams also teach for free-Islamic schools set up in Mosques are the best choice for Chinese Muslims.

Chinese Mosque Education is Islamic education with Chinese characteristics. From the Ming Dynasty to the present, Mosque Education has produced several educational sects and teaching styles. In the early period, there was the Shanxi Sect, which was represented by Feng Yangwu and Zhang Shao Shan, which focussed on "Ilm al-kalam"and "Ilm al-Trafsir". There was the Shandong Sect, which was represented by Chang Zhimei, Li Yanling and She Qiling, focussing on the 13 scriptures in Arabic and Persian, and on the study of Suffism. There was theYunan Sect, which reformed mosque education and taught the scriptures in both Arabic and Chinese. There was the Hezhou Sect, which originated in Linxia Hezhou in the Northwest of China, and which concentrated on teaching "kitab Mishkat al-Masabih"

and "Ihya ulum al-Masabih". Religious education in the Xhujiang area is in the form of small and scattered old-style private schools. Every big mosque in Xinjiang has an independent Madrassa (Islamic School), at which the teaching mode, contents and management pattern have the characteristics of central Asian Muslim education. Chinese Mosque Education has been constantly improving. When this education mode was first established, there were not enough scripture books, and few students. So at the beginning, Imams taught students in their own homes. Later, the mosque became the teaching place. In modern Chinese Islamic history, Mosque Education has made great1mprovemenu. It has a fixed teaching place, as the classroom is in the mosque. Usually, the north and south teaching halls in the mosque are specially used for teaching. Teaching both Islamic and ordinary culture, and a step-by-step teaching pattern were the new contents added to the old-style Mosque Education in the past two or three hundred years. Mosque Education is divided into two sections: One is the primary school section, in which Muslim children get basic Islamic education. Imams teach children Arabic so that they can read the Qu'ran in Arabic pronunciation. The students in the primary school section also get Tauhid education, recite selected readings from the Qu'ran, read popular religious books and learn various salat (prayers) in a period of 3-4 years; the other section is the Islamic University section, also taught by imams. The students receive systematic religious education and Islamic ethical education. They study for 6-7 years. The courses are of two kinds-basic courses and professional courses. The basic courses are Arabic, Persian, rhetoric and logic; the professional courses include "Ilm a1-Tafsir", Hadith, "Ilm al-kalam", Shariah and Suffi philosophy. There are 13 kinds of textbooks. After Enisi1ing all these courses, the students graduate with the approval of the imams who taught them. The graduate students go to mosques in various places to be imams, by invitation. There is another form of Islamic education in China, called School Education, which emerged in the 1920s and 1930s. Influenced by the new cultural concepts springing from the May 4th Movement of 1919, some Muslim intellectuals and social activists tried to find a way by which cultural education could promote the development of the nation. To establish a system of modem Islamic education, they set up Islamic schools successively in Beijing, Shanghai, Sichuan, Jinan, Yunnan Ningxia and other places in China. Of these schools, the Beiping Dacheng Normal School, Shanghai Islamic Normal School, Sichuan Wanxian Islamic Normal School and Ningxia Wuhong Chinese and Arabic Normal School made great contributions by fostering qualified personnel who not only possessed scientific and Islamic knowledge, but were proficient in Arabic. What was more important was that these educators with modem concepts also sent Chinese Muslim students abroad from the 1930s. This pioneering work added new contents to modern Chinese Islamic education. The overseas students played important ro1es in the fields of Islamic education and academic research after they came back to the motherland.

After the founding of the People's Republic of China, with the support and care of the People's Goven1ment,a national Islamic high school---the China Islamic Institute-was set up in1955.with the aim of fostering qualified Islamic leaders who love the socialist motherland, uphold socialism, possess higher Islamic knowledge and high levels of both Arabic and Chinese, and on the principle of "maintaining the fine traditions and customs of the religion", the institute practices all modern teaching methods in which the courses are composed of two kinds--Islamic courses and basic university ad courses. The institute recruits students from all over the country by means of a unified examination. To meet the requirements of Muslims at different levels, besides bachelor's degree courses, the institute also runs polytechnic degree courses, research classes, overseas student supplementary classes and imam training classes. Besides history, geography, politics, Chinese, and other social science subjects, the students also study the Islamic scriptures. After finishing their studies, the students are required not only to be proficient in Mosque affairs, foreign affairs and teaching, but have a certain level of theory and culture, so that they can become senior religious personnel who meet the needs of socialist construction.