Brief Introduction to Islam in China 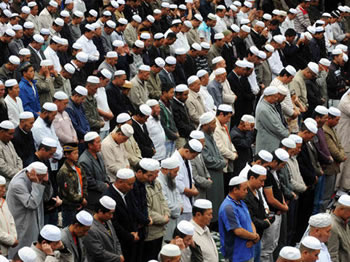 Islam, one of the world's three most important religions, was transmitted from Arabia to China in the mid-7th century A. D. .Over many centuries, diplomats and traders built a bridge of economic and cultural exchanges connecting the two major areas, China and Arabia. It was they who brought this religion of global importance to China, and at the same time transmitted ancient Chinese culture all over the world.

According to Chinese historical records, Islam was transmitted to China's interior during the Tang and Song Dynasties (618-1279). There were two silk trade roads (a sea road and a land road) connecting China, Central Asia and the Middle East in those days. The two trade roads made tremendous contributions to the development of world culture by shortening the distance between the eastern culture and the western culture. Along these roads, the ancient Chinese culture was introduced to the Western world. At the same time, the philosophical concepts of Islam and western civilization were transmitted to China. Thus, traditional Chinese culture, which occupies a very important position in world cultural history, was enriched with new contents.

According to the records of the Book of the Old Tang Dynasty, the Tazi sent envoys to pay tribute to the Tang Dynasty in the second year of the reign of Emperor Yong Hui (651 A. D.). In Chinese history, that year is considered to mark the beginning of Islam's introduction to China. Chinese records say that during the period 651 to 798, 39 Arabian envoys visited China, and more and more Arabian and Persian traders came to China to do business. The frequent friendly exchanges between the governments and the frequent commercial intercourse, on the one hand, promoted the existing traditional friendship between China and the Arabic world, and on the other, provided good conditions for Islam to spread within China. The routes to China for the envoys and businessmen from Arabia and Persia were as follows: the land route began in Persia, traversed China's Xinjiang region, and along the ancient silk road, and finally terminated in the inland cities of China, such as Xi'an and Luoyang; the sea route started at the Persian Gulf, passed the Malay Peninsula, and finally arrived at the trading ports along the south coast of China. Chinese historical records also have accounts of how Arabian and Persian traders carried on business and lived in Chang'an (the capital) and various places along the Chinese coast. By governrnent permission during the Tang and Song dynasties, these traders were allowed to live in such places as Guangzhou, Yangzhou, Quanzhou, Hangzhou,

Chang'an, Kaifeng and Luoyang. They led peaceful lives in these places, following their own beliefs and customs. They lived in China for so long .that they did not want to return home. Thus, they built mosques and tombs in these cities, married local residents and raised children; their children became the early Chinese Muslims. While sticking to their Islamic faith, and trying to avoid conflicts with Chinese traditional culture and other religions in China, they lived in compact communities. They did not preach Islam to the outside community, but on the contrary, tried to adapt to Chinese economic and cultural conditions. As a result, they led peaceful and happy lives. They brought advanced Chinese scientific technologies represented by the Four Great Inventions to Arabia and the Western world, becoming scientific and cultural envoys of the Middle Ages.

The Yuan and Ming dynasties were important periods for the spread and development of Islam in China. The powerful Mongols conquered the Islamic countries and nations in central and western Asia, destroying the Abbasid Dynasty of the Arabian Empire in 1258. They inducted Arabian and Persian prisoners of war into their armies when they attacked and unified (China. Among the inductees were carpenters, religious scholars and nobles, numbering tens of thousands. In the historical records, they are described as people who could fight bravely if they had horses to ride, while working as shepherds when there was no fighting. After the Mongolian troops were victorious, they set up the powerful Yuan Dynasty in China. This ushered in a new era, in which politics and economy saw great developments. At that time, transportation between China and the Western world was so convenient that their trade exchanges were very frequent, and diplomatic relations were also friendly.  All these things created good conditions for Islam to spread to the east. In the Yuan Dynasty, lots of Muslim traders from Central Asia1 came to China. In the Samarkand Legend of the History of the Ming Dynasty, it says that Muslims were scattered allover China. Today, in Beijing, Xi'an and in the main cities along the southeast coast and along the Grand Canal, some old mosques and tombs of ancient Muslims are still well preserved. Influenced by economy, politics and intermarriage, lots of people of the Mongolian, Han and Uygur nationalities were converted to Islam in the Yuan Dynasty. These people were called Hui. Historical materials prove that in the Yuan Dynasty, Islam had developed on a relatively large scale, and Islam with Chinese characteristics was also formed at that time. Muslim communities centered on mosques, which began to appear in cities and villages.

From the end of the Yuan Dynasty to the early part of the Ming Dynasty, the Hui nationality emerged. From the end of the Ming Dynasty to the early part of the Qing Dynasty, Chinese Islam further developed. Besides the Hui nationality, several other minority groups also accepted Islam as their religion. As members of Chinese society, Muslims, represented by the Hui nationality played important roles in various aspects of social life. In order to spread and develop Islam and Islamic culture, the early Chinese Muslims attached importance to the development of Islamic education. Islamic Mosque Education, first advocated by Iman Hu Dengzhou of Shanxi province, gradually influenced the lives of Muslims in the areas of central and Northwest China. This kind of education helped to promote Islamic culture widely. The translation of Islamic scriptures into Chinese, which appeared at the same time as mosque education initiated and laid a foundation for the development of Chinese Islamic academic culture. Many Muslim scholars of the Ming and Qing dynasties, such as Wang Daiyu (c. 1560-1660), Ma Zhu (1640-1711), Liu Zhi (c. 1655-1745) Jin Tianzhu ( 1736-1795) and Ma Fuchu ( 1794-1847), were renowned as scholars who not only had a good knowledge of the four religions (Islam, Confucianism, Taoism and Buddhism ), but were proficient in two languages---Chinese and Arabic. They used Confucianism to expound the Islamic scriptures, and wrote and translated numerous works. They employed ancient Chinese philosophical concepts to explain the principles of Islam, promoting Islamic development with Chinese characteristics. Thus, the Chinese Islamic philosophical system gradually came into being.

Islam spread to the Xinjiang area in the l0th to 11th centuries. The way the local people accepted Islam was different from the way people in other parts of China accepted it. Islam did not spread quickly after Muslim groups were formed, but only after the nobles were converted to Islam and claimed it as the state religion. The nobles preached Islam to their people. So a combination of politics and religion was the feature of the spread of Islam in Xinjiang. Muslims from various nationalities in Xinjiang and Muslims from the inland areas rose in revolt together against the Qing Dynasty's exploitation and national discrimination-In their

production and daily lives, Muslims in Xinjiang created local culture and arts with strong local characteristics, and greatly enriched Chinese national culture as well as Chinese Islamic culture. Especially in modem times, Xinjiang Muslims have responded to the slogan "education saves the country. "The new mosque education promoted by Muslims of Hui and other nationalities, has contributed a great deal to the development of China's traditional Islamic culture.

Following the founding of People's Republic of China,under the leadership of the Connmmist Party of China and the Central People's Government the policy of religious freedom was fully implemented and carried out. The religious life of Chinese Muslims was also h1ly guaranteed. There are ten minority groups in China which believe in Islam:The Hui, Uygur, Kazak Uzbek, Kirgiz, Tajik, Tatar, Dongxiang, Sala and Baoan peoples. Their total population is 20 million. The distribution of the Chinese Muslim population is characterized by being "scattered widely and concentrated in small groups". There are 30,000 mosques and 42,000 imams(mullahs)in China. Belonging to the Sunni branch of Islam, Chinese Muslims follow Hanafiyyah in Shariah(the doctrine and law). In addition, at the end of the Ming Dynasty, Suffis from Central Asia who migrated to northeast China, gradually formed the Menhuan system (also called "IShan" in the Uygur language of Xinjiang). Each Menhuan revolved about one religious leader. By administering some mosques and building a comprehensive management system, they formed different sections and added new contents to Chinese Islam. Although they belong to different Menhuan factions, they lead their religious cultural lives on an equal and harmonious atmosphere, and lead the Muslims of various nationalities to take part in the construction of socialist civilization. )